An OSERS Guest Blog post by Felipe Martinez, a father of a daughter with Down syndrome. 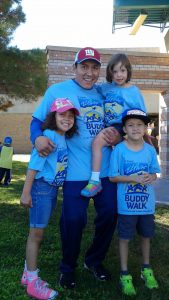 The Martinez family, including Baby G.

We started with 32 week old twins. Throughout that struggle, we had no idea what was yet to come. Eighteen months later Baby G was born. Our world was about to be turned upside down…again.

Upon receiving the preliminary diagnosis of Down syndrome, I was in shock. I had no clue about what doctors and nurses were telling me, and I had not even had a chance to speak with my wife, Amy, about the newest addition to our family. Upon receiving the news of possible heart defects, the Down syndrome diagnosis took a back seat. Our next mission was to get Baby G to gain some weight to be able to handle open heart surgery. The services were not available locally, so we had to make arrangements to leave town for two weeks. After the initial confusion and medical procedures, Amy and I finally had a chance to sit down and discuss our future. The twins were well, and Baby G had recovered from her major operation.

Baby G has played a major role in how we are spreading awareness today. She has brought a whole new meaning to celebrating life. She is the happiest human being we have ever met. She is the most loving person on the planet. This comes with a slight price, though. She has learned that her charisma can get her out of tasks that she would rather not do. It has been particularly difficult getting her to focus on school and academics.  Although she started early education when she was two and a half, she has never had an environment with a structured program in place. She is now five years old, and is having a difficult time adjusting to a public school system that offers more structure. After two Admission, Review, and Dismissal (ARD) meetings, we are still struggling to come up with a plan that will help her focus and learn.

Collaborating with school administration, Amy and I continue to establish a routine that comes home with her every day. We try to do the same types of activities and achieve the same goals at home and school. We, as parents, sometimes feel guilty for not implementing these types of strategies earlier in her life; it may have helped her adapt more easily to the new setting. There are no regrets, but through our experience, we can help other families avoid similar situations.

Five years have gone by, and I would not trade them for anything in this world. I am the President of the Down Syndrome Coalition for El Paso. Baby G has pushed me to be her best advocate. She has also taught me to live in the moment. Most importantly, I have learned that there are so many families that share a similar story. Our goal is to raise awareness so that no other family has to worry about its child’s future.

Opinions expressed herein do not necessarily reflect the position of the U.S. Department of Education and such endorsements should not be inferred.