An OSERS Guest Blog post by Jadene Sloan Ransdell, who has a son with Down syndrome. 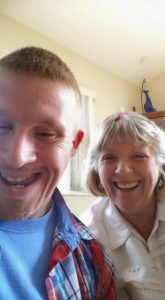 Matt with his mother, Jadene

I share my life with a son who has Down syndrome. His life has been filled with twists and turns that have helped to make me the person I am today. We’ve been through a lot—Matt and I—from the time we received his diagnosis and were encouraged to place him in a state institution, to residential placement in Germany while my husband served in the U. S. Army, to now—he is over 40.

Matt experienced delays in his development despite my dedication to keeping him stimulated and as active as possible. He took his first steps just before his third birthday and was finally toilet trained when he was nine years old. When Matt was a teen, he had a seizure in the shower. His use of words for communication was inconsistent, as he would gain a vocabulary and then lose it, several times throughout his life. He displayed many characteristics that resemble Autism, although he was not diagnosed until he was an adult. Over the years he has received several mental health diagnoses that now make sense with identification of early onset Alzheimer’s. There is much to share about that discovery, but I want to focus on Matt’s incredible accomplishments, despite the challenges that he has faced!

Matt left public school in 1996. We paid privately for him to attend a community program two days a week, although he wasn’t especially happy there. In late 1997, he received funding through a Medicaid Home and Community Based Waiver to pay for needed services. With that resource, he moved into his own home (with live-in support) and did something that he enjoyed. Of course, when he moved, I missed him terribly, but I knew that he deserved to grow up and lead his own life, just as his brother had. 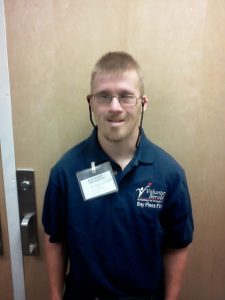 About five years ago, he was given a chance to volunteer at the local VA hospital. It was a life-changing opportunity, as he takes incredible pride in his job. He loves working with his “soldier men” and the patients appreciate seeing him. The medical staff and other volunteers have told us that he is a wonderful asset. In fact, former Congressman C.W. “Bill” Young (deceased) formally thanked Matt for his service to the veterans and that tribute can be found in the May 20, 2013 Congressional Record!

I am proud of Matt and the path that he has walked. Some painted a bleak future for him. The recommendation of a day program and group home placement was not best for him, and I knew it. I worked tirelessly, encouraging people to discover the incredible person that I knew. And Matt worked hard, too. Even though he never spoke more than a few words at a time and had periods of unsettling behaviors, Matt has created a life that is beautiful and very meaningful to him, me, and the world. He has shown me there is always hope for the future!

Opinions expressed herein do not necessarily reflect the position of the U.S. Department of Education and such endorsements should not be inferred.