October is Down Syndrome Awareness Month 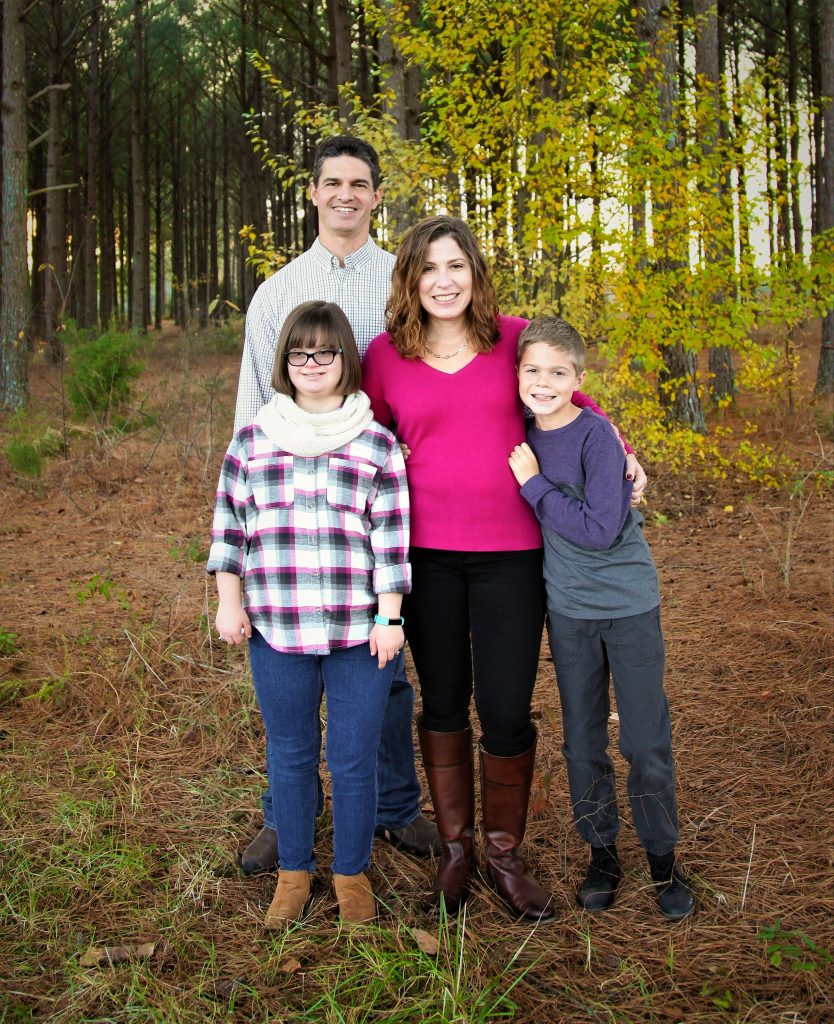 Seventeen and a half years ago, our world was rocked when Kelsey was born.

Everything changed when she was whisked away to the neonatal intensive care unit (NICU) for observation. The obstetrician and NICU pediatrician came back to tell my husband and me that Kelsey had a pretty significant heart defect, and they suspected she had Down syndrome. Many questions swirled in our heads: Could her heart be repaired? Will she survive? What will our life be like raising a child with Down syndrome?

In time, we received some answers. Yes, she would survive heart surgery. Thankfully, it was fully repaired with just one surgery when she was still a tiny 4-month-old infant. Other than that scariest day of our lives — when we handed our baby off and trusted complete strangers to open her up and put her back together — our life has been kind of typical. Sure, there have been some extras: more doctors’ visits, early intervention when she was younger, and now individualized education programs and transition planning. Over time, I began to notice that just about every family carries something extra. It’s the only life we’ve known, so it’s just what we do.

Some answers we are still figuring out. What will her life be like? Our lives are shaped by our experiences, and we’ve tried to give Kelsey as many of the experiences that we would provide for any other child.

One of the best pieces of advice we ever received about raising Kelsey came from her cardiologist before her heart was ever repaired. He said, “do not spoil this child; treat her like you would any other child. Have expectations.”

We might have figured that out on our own, but what he said helped to shape Kelsey’s life more than he will ever know.

Since academics and sports are important to my husband and me, we incorporated a lot of reading and developmental learning games early on and then sought the schools and programs that would set high expectations.

We signed Kelsey up for our local park and recreation soccer league when she was 5, and my husband volunteered to be an assistant coach to keep her on task. A couple years later, he was head coach and led Kelsey’s teams into championship games. As the girls got older, it became clear that the ability gap widened, and Kelsey needed to be in a different sports environment to remain safe and competitive.

Off to Special Olympics we went! 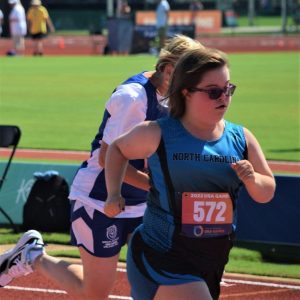 Special Olympics has been a wonderful experience for Kelsey and us. She has played softball, soccer and participates in athletics (also known as track and field). This past June Kelsey represented North Carolina when she competed in the 2022 Special Olympics USA Games in Orlando, Florida. Not only did she receive a bronze medal for her 100-meter dash and a seventh-place ribbon for her mini-javelin throw, she made lasting memories, made friends with athletes from across the state and met people from many other states. I don’t know many 17-year-olds who can say they competed at a national level! 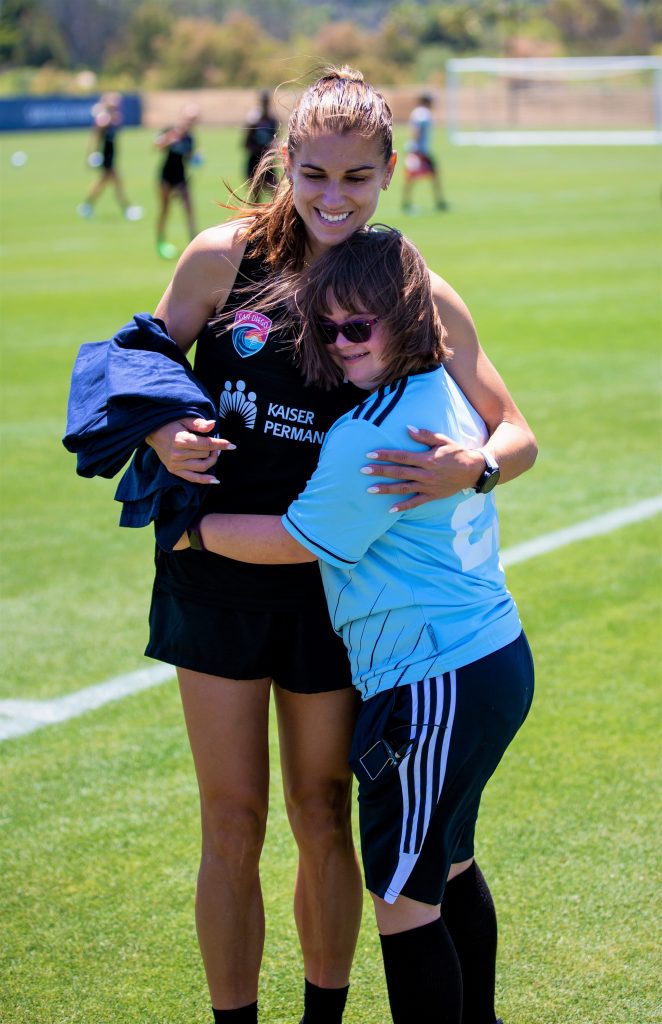 This was the summer of Kelsey. As if the Special Olympics USA Games wasn’t enough, Kelsey also met her sports hero, Alex Morgan, a player for the San Diego Wave in the National Women’s Soccer League and on the U.S. Women’s National Soccer Team. Morgan helped the U.S. win their 2015 and 2019 FIFA Women’s World Cup titles. This epic meeting was made possible by peers in her high school who were part of a Junior Dream Team with an organization called Dream on 3. Dream on 3 grants sports wishes (similar to Make-A-Wish) to kids experiencing life altering conditions. If Kelsey had not been included with her typically developing peers as much as possible through eighth grade, she would never have known these students who chose her for this experience.

Of course, these events are part of the highlight reel. Parents don’t always reveal the hard stuff. We certainly never envisioned living through a global pandemic when asking, “What will her life be like?”

During Kelsey’s eighth grade year, the world shut down. Those were dark times for many of us and a lot of people found the light on the other side by leaning into their friendships and staying connected through texting, email and phone calls. That’s difficult for a person who has some expressive communication challenges. It’s also difficult when most of your friendships are school-based. Kelsey makes friends pretty easily because she’s outgoing, funny and into the same things her classmates follow like video games, music and sports. Translating school friendships into authentic social friendships in which she’s included outside of school has not been as easy. Those were some rather lonely times.

Again, we are grateful to the organizations we were involved like Special Olympics, Dream on 3, and the local Down Syndrome Association, who provided whatever virtual programming they could and then gradually phased into in-person events. We are thankful for the parents who have raised their kids to see past Kelsey’s communication challenges and to include her.

Will she be included in social circles after graduation? What will her life be like? 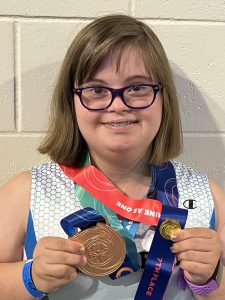 We are now well into transition planning for adult life, and we are faced with these questions even more. Kelsey is enrolled in the occupational course of study diploma track. She’s a junior and two evenings per week since March she has been employed in an ice cream shop that she says is the “best job ever!” She arranged her job through Vocational Rehabilitation Youth Transition Services. This year she’ll go out to job sites for employment training as part of the school program. We know she will be ready to work when she graduates. Will the work be ready for Kelsey?

If only we had a crystal ball to see into the future, but, alas, we do not. We will continue to rely on the experiences we have shared to shape the future. We will lean into our family, friends, and community, including local and statewide organizations that support families raising a child with a disability. We will answer the questions one at a time.

What will her life be like? We are all working on that one!

Terri Leyton is the Technical Assistance Coordinator for Region B Parent Technical Assistance Center and Early Intervention Project Manager with Exceptional Children’s Assistance Center. She has a Bachelor’s Degree in Meteorology from Penn State and an MBA from UNC-Charlotte. Terri has worked with Exceptional Children’s Assistance Center since October 2017. Before that, she worked for the Down Syndrome Association of Greater Charlotte for seven years. Terri is originally from Northeast Pennsylvania and now resides in Harrisburg, North Carolina with her husband, Steve, and two children (Kelsey, 17, and Tyler, 11). She proudly wears the moniker of Soccer Mom, loves the beach and girls’ trips disguised as 5K races!