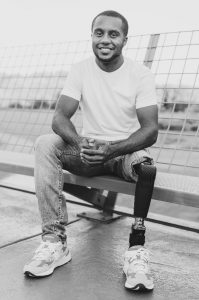 Deborah Jackson is the proud mother of Desmond Jackson, a member of the 2021 USA Paralympic Track and Field Team for the 100m event and the long jump. Desmond was born with a congenital birth defect, which resulted in an amputation when he was nine months old. He was the first above-knee amputee to run on a high school track team in the state of North Carolina. Desmond encourages other individuals with physical challenges to “get off the sideline and into the game!”

1. What do you remember most about your experiences with early intervention?

As the mom of a young child with limb loss, I was unsure of what my son’s future might hold. However, early intervention quickly changed the uncertainty I had about his future into thoughts of possibilities. Early intervention supported the needs of my child, and also met the needs of me as a working mom. Many of the services were provided at his child development center which made life so much easier for me and for him. He was comfortable in that environment and we quickly developed a bond with his service providers. Early intervention was a God-send and I still sing its praises today.

2. What skills did you gain during the early years that influence you currently?

One of the very first things my son learned was how to fall. To this date, he uses those same skills and it has served him well. My son also learned how to roller skate while in early intervention and that was almost unheard of at that time. Because of early intervention, I’m sure my son learned determination, stick-to-it-ness, and confidence that helped him take on different tasks in life. He is currently a United States Paralympian competing in track and field, and ranked 5th in the world and no. 1 in the US in the 100m event. I am totally convinced that early intervention played an integral part in his athletic development at an early age. He started competing in track events at the age of 8.

3. What would you like the professionals who worked with you during the early years to know?

My son’s physical therapist was the absolute best. She set the standard for what we should expect from future providers and my son is all the better because of her expertise and willingness to improve his mobility. We can’t thank her enough.

Yes! As a parent we all want the very best for our kids and many of those things require outside assistance. Early intervention was the outside “expert” assistance that we needed and I’m most thankful for the program. I’m not sure where we’d be today had we not benefited from these much-needed services. I would say to families, “Give early intervention services a try!” Often, we don’t know what we don’t know, therefore we may miss out on many things. By receiving services early on in a child’s life, we as parents are arming them with skills that will carry them through adulthood. I highly recommend services during the early years and I know your child will thank you later.