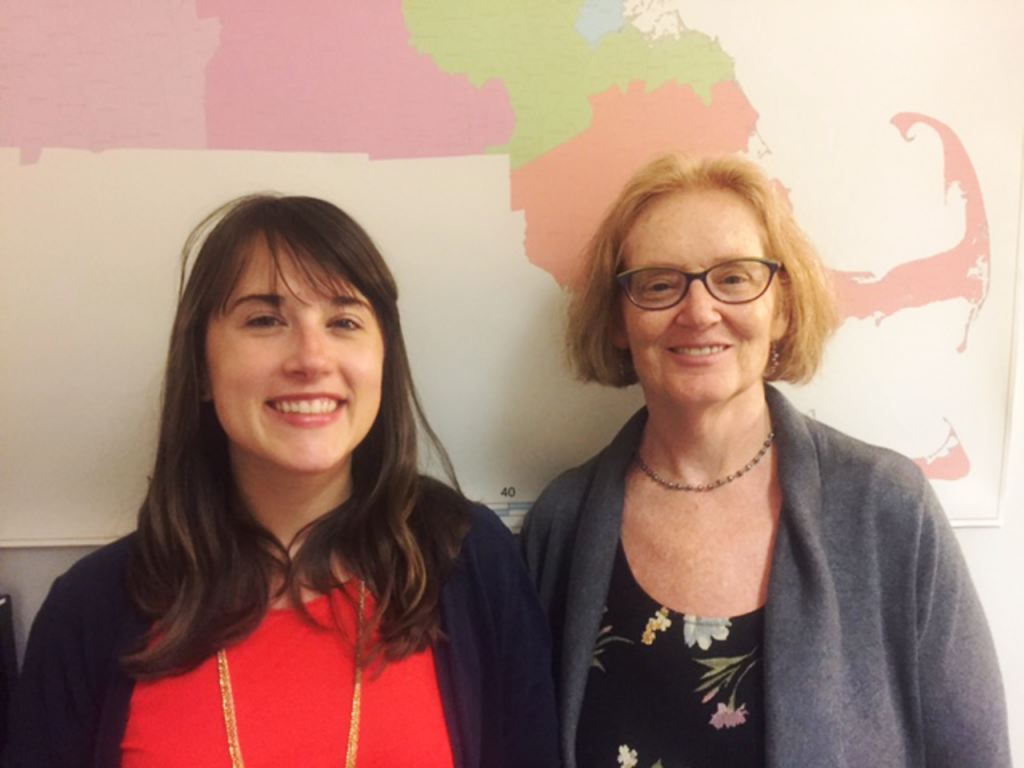 Kate Roper is the Assistant Director of Early Childhood Services in the Bureau of Family Health and Nutrition at the Massachusetts Department of Public Health (DPH). Roper oversees several state and federal grants, including Project LAUNCH and Early Childhood Comprehensive Systems (ECCS) grants, and co-leads the Massachusetts Pyramid Model State Leadership Team. Roper has been in the field of early childhood education since 1978 as an infant teacher, teen parent child care director, trainer, adjunct faculty member, and independent consultant and curriculum developer.

Eve Wilder is the ECCS Coordinator at DPH’s Bureau of Family Health and Nutrition. Wilder has managed early childhood projects at DPH through the state’s ECCS grant for over 7 years. She has worked to strengthen early childhood systems of care in a variety of capacities since 2005, from providing home-based services to young children with autism spectrum disorders, to policy and program development at the Massachusetts legislature and DPH.

ED: How did you begin your career in early childhood?

Kate: I’ve always had a passion for understanding why people become forces for good. So, in college, I ended up with a joint major in psychology and education. I became more interested in early childhood by spending time in the nursery school on campus. At first I thought focusing on kindergarteners was too old, and then I decided focusing on preschoolers was too old. In my first job out of college, I ended up as an infant teacher in a child care program that was focused on supporting families going back to work. Here I gained an understanding of the importance of working with the whole family. Later, I earned a master’s degree in human development and worked with high-school-aged young parents. I started working alongside social workers and guidance counselors, and became familiar with the family systems model, where the family is central to supporting healthy development in their young child. I also began adjunct-teaching at local colleges on early childhood development and started consulting with the Massachusetts Department of Public Health (DPH).This eventually led to a position working directly for the DPH Bureau of Family Health and Nutrition. In 2003, Massachusetts was awarded an Early Childhood Comprehensive Systems (ECCS) grant from the U.S. Department of Health and Human Services’ (HHS’) Health Resources and Services Administration (HRSA). I started working on the ECCS grant which, at that time, was very open-ended and focused on coordinating across systems of family support, parenting education, early education and care, health, and mental health. Eventually, in 2006, I became the director of our ECCS grant. That year was also the inaugural year of the Massachusetts Department of Early Education and Care (EEC) and we partnered with them to build a strong emphasis on mental health. In 2009, we received a Project LAUNCH (Linking Actions for Unmet Needs in Children’s Health) grant from HHS’ Substance Abuse Mental Health Services Administration (SAMHSA) and I took on leading that project as well.

Eve: My career in early childhood started in college. I volunteered at a family shelter where I helped to provide child care. There was a boy living with his mom at the shelter who, at the age of four, was diagnosed with autism. I was blown away by the lack of supports for him and his mom and the late age of his diagnosis. That really motivated me to learn more about the various systems in place to help children and families—health, education, and social services—and to identify and find solutions to cross-systems-level issues. After I graduated from college, I became a specialty early intervention provider under the Individuals with Disabilities Education Act (IDEA) Part C, where I worked for several years providing home-based services to young children with autism spectrum disorders (ASD). I learned first-hand how the family and community context impacts child development. I then had an opportunity to work as a legislative aide for a member of our state legislature. It was fascinating working on the policy side, helping draft bills related to early childhood health and development. Eventually I earned a master’s degree in public health. I became a Leadership Education and Neurodevelopmental Disability (LEND) program fellow, and was able to focus on systems and policy issues impacting children with special health care needs. I started at DPH as a graduate student intern working with Kate and came on as staff when a position opened up on the ECCS grant. I’ve been at DPH for seven years working on both ECCS and the state’s Early Learning Challenge (ELC) grant.

ED: What efforts have you and your organization been involved in to improve the quality of early childhood programs and services?

Kate: For the first eight years of our ECCS grant we mostly functioned as a convening and development office that served any of the state’s early childhood collaborative projects and technical assistance (TA) opportunities. For example, we worked with the Children’s Trust to bring Strengthening Families to the state; and with EEC to being implementing the Pyramid Model. We convened a state leadership team for Pyramid Model implementation. We also used our convening power to develop an Early Childhood Mental Health Strategic Plan, which led the state to apply for and receive a SAMHSA systems of care grant and our Project LAUNCH grant. Our efforts were really focused on working with other state agencies to develop initiatives that benefit young children. It worked out nicely that during this phase, EEC invited us to the table when they applied for and were awarded the ELC grant. As one of four agencies within the state to receive ELC funding, we helped lead efforts to develop coordinated TA focused on trauma-informed care and family mental health. We also helped bring more of a health focus to child care in the state by building capacity in regional offices and by hiring regional nurses.

Eve: Prior to the ELC grant and regional nurses, our ECCS grant built capacity for health consultants supporting early learning and care programs. These consultants provided basic information when it came to working with children with complex medical needs or addressing the outbreak of a virus. When we put four regional nurses into the field, it was great because they provided direct medical support around medication administration (including asthma and severe allergies), worked with young children with diabetes, helped address the obesity crisis, and more. Unfortunately, when the ELC grant ended, we were not able to find a way to sustain this health work, including funding for the nurse positions. We have, however, tried to maximize the resources that were developed under ELC through TA and train-the-trainer approaches. We’ve had to be creative and adaptable in partnering with colleagues within DPH and across the early education field to sustain many components of the work.

ED: How has your ECCS project evolved over time?

Eve: In 2012, HRSA changed the guidance for ECCS and increased its emphasis on infants and toddlers. For our grant, we chose to address and mitigate toxic stress on the development of infants and toddlers in two local communities, Springfield and Chelsea. The first phase of this work had fewer defined parameters so our two communities did a lot of relationship building, including identifying a common vision for addressing toxic stress. We are now in the later phase, known as the ECCS Impact Project, which has additional structure, a focus on measuring our impact, and increased funding. As an ECCS grantee, we are part of a Collaborative Improvement and Innovation Network (CoIIN), which is a multidisciplinary team of federal, state, and local leaders working together to tackle a common problem. HRSA supports CoIINs that address a range of topics. We participate in the ECCS COIIN. The primary aim of the ECCS grant is to show a 25-percent increase in age-appropriate developmental skills among our participating communities’ 3-year-old children. With our two communities and our state-level partners, we discussed and defined what that means for us. Once we did this, the CoIIN guided us through using a Plan-Do-Study-Act methodology to impact change.

When we first convened our teams in Chelsea and Springfield, we focused on identifying where the needs were in these communities. We found that we have a strong IDEA Part C system, relatively high levels of developmental screening, and nearly universal health insurance coverage for children. However, we are still challenged by persistent inequities in health and development outcomes for young children of color and those living in poverty. Through a partnership with a local United Way program’s developmental screening initiative, we are training parents from the communities on how to use the Ages and Stages Questionnaire (ASQ), a developmental screening tool, and how to reach out to families that are not connected to existing programs. We do this through local institutions and establishments such as libraries, parks, and laundromats. This approach is focused on building connections to isolated or not-yet-engaged families, talking with them about their child’s development and, if there are any concerns, helping these families connect to resources and services.

Another exciting piece of this ECCS grant is a coordinated database for ASQ that we are building in partnership with the United Way. Parent screeners enter screening data into the database, and then other programs (with a data sharing agreement) can see the data at the aggregate community level. The goal is to begin to identify trends in the community. We have found this to be particularly helpful in Boston. When we were completing the ECCS grant application, we realized that we didn’t have a consistent health and development measure for young children at the population level, and this ASQ database has been our first step towards developing one. We are also exploring how we might build on some data integration efforts that DPH is undertaking, including a community-level dashboard that includes aggregate data, as well as ways to use de-identified but matched data across data sets. This allows us to look at aggregate data from various data sets (and keep individual data private) so we can identify areas of risk and the outcomes of interventions. The final piece of our ECCS grant that we’re trying to accomplish is to make more of a collective impact in the state, across agencies and funders, by building processes and networks that sustain the work.

ED: What suggestions do you have for others interested in using systems-level work to improve early childhood services and programs?

Kate: Cross-systems work is really powerful, and having HRSA funding for the convening and systems-building work in our state has been extremely useful. We recommend you start with a small project; build trust; and learn about other agencies’ and partner organizations’ strengths, expertise, and resources. Sustainability is always a challenge, so bring it into the work from the very beginning. Try to be creative and intentional about bringing outside partners in to help.

The other suggestion we have is to keep showing up to meetings. Attend those meetings where at first you aren’t comfortable, but eventually you can learn the language of that other system. For example, the word “assessment” means something different depending on who you are talking to and about. As you bring together folks from different disciplines and programs, become a translator across systems. ECCS has allowed us to be like Switzerland, a neutral convener. And always remember the focus of this work that we’re doing: it’s about children and families.