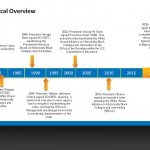 In 1980, President Jimmy Carter signed Executive Order 12232, which established a federal program “… to overcome the effects of discriminatory treatment and to strengthen and expand the capacity of historically black colleges and universities to provide quality education.”

In 1981, President Reagan, under Executive Order 12320, established the White House Initiative on Historically Black Colleges and Universities, which expanded the previous program and set into motion a government wide effort to strengthen our nation’s HBCUs. In 1989, President George Bush signed Executive Order 12677. This executive order established a Presidential Advisory Board on Historically Black Colleges and Universities to advise the president and the secretary of education on methods, programs, and strategies to strengthen these valued institutions.

In 1993, President William Jefferson Clinton signed Executive Order 12876. This executive order required for a senior level executive in each agency have oversight in implementing the order, and that the Office of Management and Budget be involved in monitoring implementation of the order.

On Feb. 12, 2002, President George W. Bush signed Executive Order 13256. This executive order transferred the White House Initiative on Historically Black Colleges and Universities to the Office of the Secretary within the U.S. Department of Education. Previously, the White House Initiative was housed in the Department’s Office of Postsecondary Education.