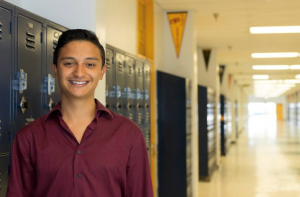 Mr. Gonzalez was born in Guadalajara, Jalisco, Mexico but moved with his family to California before turning two years old. After living in southern California for a few years, his family eventually settled in the San Joaquin Valley of California where he lived until he went to college at the Wharton School of Business at the University of Pennsylvania. During his time at Penn, Mr. Gonzalez was a founding board member of Penn for Immigrant Rights (PIR) and led the PIR scholarship committee. They raised money for a scholarship fund open to all graduating high school seniors in Philadelphia pursuing higher education regardless of their immigration status.  To date, two students have received the scholarship and Penn for Immigrant Rights has continued working to further help undocumented students in Philadelphia.

After Mr. Gonzalez graduated, he joined the 2014 Teach for America corps. He teaches 7th grade math in Northeast Los Angeles at a predominantly Latin@ school with over 90% of students receiving free or reduced lunch.   He works on instilling a love for math in his students on a daily basis and aims to incorporate its relevance to their lives in his lessons.  For example, last year, students read about women and ethnic minorities in STEM, researched a STEM career they would be interested in pursuing in the future, and applied rational number concepts they had learned throughout the trimester to argue the importance of diversity in STEM related fields.  Mr. Gonzalez hopes to do more projects that show his students just how important their education is, not only for themselves, but also for their communities.

Being undocumented heavily influenced my elementary and secondary education. I didn’t share my immigration status with anyone including my teachers and administrators. Navigating the school system was difficult but the college application process was particularly grueling. I could not accept scholarship nominations, apply for federal grants, or, due to fear, ask for advice from counselors. In my classroom, I share my story with my students in the hopes that they’ll feel they have a safe space for them to share their own concerns and challenges with me.  I teach to instill confidence, resourcefulness, and love in my students.

I never thought I would go through a more stressful experience than my first two years in college but teaching proved me wrong. It is a 24/7 job that I can’t just turn off, because I am always thinking about my kids, their families, and how I can be the teacher I want to be.  Although teaching is the hardest thing I have ever had to do, seeing my students’ faces light up when they finally understand something they have been struggling with or listening to them lead their groups in math discussions makes the long, hard hours worth it. Despite stereotypes and statistics, my kids have an incessant hunger for knowledge.

In college, I met the most influential educator in my life: Johnny Irizarry. His impact on my life and education began before I even met him face-to-face.  After jumping hurdle after hurdle to be admitted to Penn as an undocumented student, I still had no financial aid, no connections, and no one who could help.  My admissions officer introduced via email to Johnny, director of The Center for Hispanic Excellence: La Casa Latina. Johnny made it his mission to help me overcome major obstacles for undocumented students seeking higher education. He put me in contact with the one financial aid advisor who knew how to help undocumented students. And, perhaps more importantly, he introduced me to a community of supportive students, faculty, and staff. Johnny was more of a father figure and mentor than anything else.  I sought his advice for all my problems: immigration, academic, and social.  Then, I had the privilege of being in one of his classes.  The way he spoke about Latin@ art and culture with so much passion enhanced his students’ enthusiasm and encouraged engaging debates among my peers and me.  I lead my life as an educator following his example.