The White House Initiative on Advancing Educational Equity, Excellence, and Economic Opportunity for Hispanics is led by a dynamic team of individuals who have extensive experience in government service and the private sector. 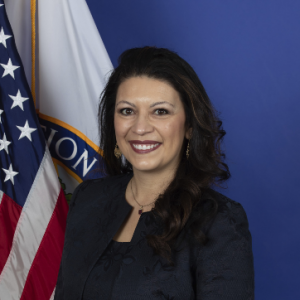 Melody is Executive Director of the White House Hispanic Initiative, an office created by President Joe Biden’s Executive Order 14045 and housed under the leadership of Secretary Miguel Cardona at the U.S. Department of Education. The Initiative works to: advance cradle to career education, equity and economic policy goals in partnership with the White House, federal agencies and external stakeholders; lead a 21-member commission that was recently announced; run a federal Interagency work group centered in advancing equity and access to federal resources for the Latino community; and lead in-person and virtual public engagement efforts.

Melody joined the Biden-Harris Administration from the National Education Association, the nation’s largest union representing 3 million educators – where she managed grants, partnerships and advocacy work with Latino organizations and local union affiliates. Her prior experience includes serving: on the Biden-Harris transition team’s Office of Personnel Management Agency Review Team; as a Senior Executive Service-level appointee in the Obama-Biden Administration — serving first as the U.S Department of Labor’s Mine Safety and Health Administration Chief of Staff and then as Deputy Chief of Staff at the U.S. Office of Personnel Management; as a Legislative Assistant then Director of Member Outreach for former Congressman Xavier Becerra and the U.S. House of Representatives’ Democratic Caucus; as the National Hispanic Leadership Agenda’s Founding Director of the Latino Appointments Program and LatinasRepresent initiative; and as campaign staff to Arizona Congressman Raul Grijalva, Virginia Governor Ralph Northam and the Obama-Biden campaigns in 2008 and 2012.

Born and raised in San Diego, California, Melody earned her bachelor’s degree from the University of California San Diego, where she serves on the UCSD Alumni Association board, and began her career as a news writer at San Diego’s NBC News affiliate and as General Manager of Chula Vista’s Convention and Visitor’s Bureau. She went on to earn her Master of Public Policy and Executive Leadership Coaching certificate from Georgetown University. Holding additional leadership certificates from Harvard University’s Kennedy School of Government and the Center for Creative Leadership, Melody is a passionate public servant committed to building the capacity of organizations and leaders shaping a brighter, more equitable future for our nation.

An El Paso native and daughter of a mom who is a seasoned second-grade educator, Marifer joins the Biden-Harris Administration after recently serving as the Senior Advisor for Latino Engagement at the Democratic Congressional Campaign Committee (DCCC). At the DCCC, she led the paid media program and national partnerships engaging Latino voters and supporting Latino candidates. She brings experience consulting for a creative marketing firm and Equis Institute, a research and communications organization specializing in increasing the national understanding of our diverse Latino community. She managed national partnerships, and partners’ field and digital plans, at For Our Future during the 2020 election cycle. She is also an alumna of the staff teams at Planned Parenthood Federation of America and Planned Parenthood Action Fund, Time’s Up Legal Defense Fund and the National Women’s Law Center. She completed her undergraduate work in international affairs at American University. 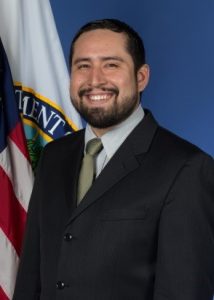 Emmanuel Caudillo is the management and program analyst to the White House Initiative on Advancing Educational Equity, Excellence, and Economic Opportunity for Hispanics. Previously on detail to the initiative in 2012, he transitioned full-time in 2013.

From 2009 to 2013, he was a budget analyst at the U.S. Department of Education, overseeing the student aid administration account. He has held research positions in various organizations, including Abt Associates and the National Council on Teacher Quality. For his commitment to his community, Emmanuel was named 40 Under 40 from the Leadership Center for Excellence in 2015. He also was a 2017 Ricardo Salinas Scholar at the Aspen Institute and 2019-2020 Excellence in Government Fellow at the Partnership for Public Service.

Originally from Los Angeles, he holds a bachelor’s degree from the University of Southern California and a Master of Public Policy from The George Washington University. His passion for education is due to the strong sense of duty and commitment his parents instilled in him.

Jasmin Chavez is a Confidential Assistant for the White House Initiative on Advancing Educational Equity, Excellence, and Economic Opportunity for Hispanics and the Center for Faith-based and Neighborhood Partnerships.

Prior to this role, she was a Policy & Communications Associate at Dewey Square Group, specializing in technology and telecommunications policy.

Jasmin currently serves as the State Director for the Virginia League of United Latin American Citizens (LULAC), making her the youngest LULAC National Board Member. She has also served as the Latino Outreach Director for Victoria Virasingh for Congress and as the Chair of the Virginia Todos Con Biden Youth Committee.

Jasmin serves her alma mater as the youngest member of McDaniel College Alumni Council’s Diversity, Equity, and Inclusion Committee. She is an alumna of the Congressional Hispanic Caucus Institute, The National Museum of the American Latino Young Ambassadors Program, and the White House Initiative on Advancing Educational Equity, Excellence and Economic Opportunity for Hispanics Internship Program. In 2018, she was awarded Woman of the Year by the League of United Latin American Citizens (LULAC) and in 2022, was awarded the Emerging Leadership Award by the same organization.