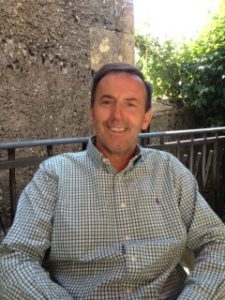 Cesar Garcia has taught for 12 years. He grew up in Spain and moved to the United States at the age of 30 following his heart after meeting an American girl (his wife of 31 years now) in Madrid. His journey into his career as a teacher began in a boarding school in Soria, Spain but this dream was not fulfilled until after a career as a bodyguard for the first democratic President in Spain, Adolfo Suarez and then in the United States he worked in a grocery store at night so he could take care of his kids during the day. After all three of his children were in public schools, he decided to go back to college and start a degree in secondary education with a major in Spanish. Mr. Garcia graduated in December 2003 from the University of Nevada, Reno and soon after was offered a job at Sparks High School to teach Spanish for Spanish Speakers and Spanish to high school students. The program has been very successful and currently he is also teaching AP Spanish Language and Culture as well as AP Spanish Literature and Culture.

I started teaching because I wanted to fulfill an old, delayed dream of mine. For seven years in my native Spain I went to a boarding school to get an education. My teachers were almost all priests and wanted me to become a priest and to dedicate my life to teaching. At age 30, I moved to Reno, Nevada in order for my wife, a native of Reno, to finish her Master’s degree in Foreign Language and Literature. What should have been an American adventure of only two or three years became a permanent move. After raising three children in public schools it became clear to me that the time had come for me to give back to society, so I decided the best way to accomplish that would be to use my knowledge, expertise, and experiences in life to teach students with socio-economic challenges. Sparks High School was and is the perfect place to fulfill my dream.

At this moment in my life I love everything about teaching. The relationship with students, the relevance of the topics, and the increasing rigor of the materials taught after the first year or two. My students are like my patients. They enter my class every day with different symptoms (happy, angry, rested, tired, traumatized, calm, crying, laughing….) It is my mission to engage, inspire, and teach them regardless of their situation in life or their mood. Teaching gave me the opportunity to get up every morning happy and ready to go with a purpose in life and the opportunity to change or make a difference in a student’s life. I had several jobs in my life and none of them gave me the feeling of fulfillment and satisfaction that being a teacher does. That’s why I would love to continue teaching in the future. In 2012, I was diagnosed with sarcoma, a type of cancer, and during that difficult time my students were the best therapy against the illness. I owe them big!

As I mentioned, I attended a Catholic boarding school in Spain from thirteen to twenty years old during Franco’s dictatorship. Not one, but several of my teachers challenged me to think outside the box, examine uncomfortable things and give back to society. I tried to inspire my students using the same philosophy that I learned more than 40 years ago. In America, Diane Rosner (Chair of the Foreign Language Department in South Lake Tahoe and Director of the Intensive Summer Spanish Institute) was instrumental in me becoming a teacher. Every day I want my students to feel in my classroom the way I felt in hers.