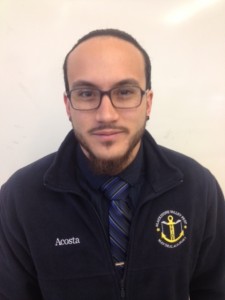 Jonathon is a passionate educator who sees his work as inextricably tied to social justice. Growing up in a low-income, single-parent household, his mother had a daily mantra: “If you get a good education, you can have any life you choose.” She made it clear that this was the only way to be truly successful. After graduating from Brown University, Acosta served as a 2011 Teach for America Corps member in his hometown of Miami. In his first year teaching, Mr. Acosta’s students were 100% proficient on their End-of-Course Algebra exam and in his second year teaching, his students were 93% proficient. He coached the first-ever wrestling team at his school which produced a second place district winner, a first place district winner and a third place county winner. Jonathon spent two years teaching eighth grade math and Algebra 1 Honors in Miami Dade County before relocating to Blackstone Valley Prep in Rhode Island where he taught eighth grade math before his promotion to Dean of Culture. Jonathon is currently enrolled in the Masters of Urban Education Policy at Brown University.

Why do you teach? When I was 10 years old I was publicly removed from my fifth period class and told I couldn’t take a gifted math class because I wasn’t labeled as “Gifted and Talented.” What the counselor didn’t acknowledge was that I had spent first grade living in Colombia with my grandmother and never had the opportunity to take the test. In response to this cruel exercise of policy, my teacher started to sneak me into her classroom for 6 months while she fed my grades to my supposed teacher. At the end of that time, she stormed into the office and demanded that I be tested. She said that she knew what she had done was illegal but that I deserved the opportunity to learn. I was taken aback by the risk that this teacher had taken for me. Mrs. Earle changed my life. Years later when I was graduating from an Ivy League university I knew I had a debt to pay. I teach for all the kids like me who just deserve an opportunity. I teach math in honor of Mrs. Earle.

When you were a student, was there a great teacher who inspired you? Mrs. Earle’s impact is described above. When I was in high school my life was generally unstable. Economic insecurity, family insecurity, and teenage anxiety combined for a combustible angry brown youth. One day I went to school looking for a problem. Earlier that morning I had found my mother crying in the kitchen over the complicated birth of my cousin. I went to school with a chip on my shoulder. In class, Mrs. Scott immediately noticed something was wrong. Instead of kicking me out of class for not doing work or being unresponsive she responded by talking to me. She validated my frustration and gave me a shoulder to cry on. She built me back up and encouraged me to be brave. Years later Mrs. Scott wrote my college recommendation and included our exchange. She recounted the event as an exercise of my strength and bravery. What she didn’t realize was that her bravery had inspired mine. Working together made me better. That is a large part of why I teach; because we work and grow along with our kids.