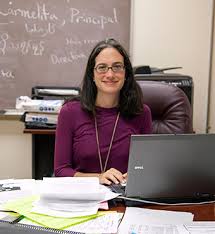 Carmelita Reyes is the principal of Oakland International High School, a school she founded in 2007 with the support of the Internationals Network for Public Schools, Oakland Unified School District, and the Bill and Melinda Gates Foundation. The school targets a population of students, newly arrived immigrants and refugees, who have historically been underserved nationally, in California, and in Oakland. OIHS students come from over 30 countries and speak more than two dozen languages. As principal, Carmelita has designed social, emotional, and academic support systems to meet the needs of this unique population and trained all teachers to incorporate language acquisition into every lesson.

Prior to becoming principal, she was a founding teacher at Life Academy of Health and Bio-Science, located in the Fruitvale neighborhood of Oakland. There, she taught 10th grade humanities and journalism. In 2005, she was awarded the honor of “Oakland Unified School District Teacher of the Year” and in 2007, she was named “Oakland Educator of the Year” by the Marcus Foster Foundation. Carmelita began her teaching career in New York City, teaching to a primarily Dominican population. Carmelita received her BA in Economics at Princeton University and studied abroad at the Chinese University of Hong Kong. She received a Master’s in Education at Columbia University.

My father was born in 1928. He attended rural “Mexican” schools until segregation ended in his south Texas county during the early 1940s. Unlike all of his fellow high school graduates, he had the opportunity to attend college. That opportunity transformed his life and future generations of my family. My goal is to give this transformative opportunity to as many students as possible. Teaching poor urban students of color well in a city and state that doesn’t fund its public schools is perhaps the hardest job anyone can imagine. It is also one of the most important jobs from a social justice perspective. I want to do something difficult and meaningful with my life — so I teach.

Some people teach because they love kids. They teach because kids are cute and delightful. That isn’t why I teach. Half the kids who enter my school are angry, traumatized, hormonal teenagers and have some pretty serious academic gaps. They can be difficult and sometimes take out their frustration on the adults around them. In that moment, they are not cute and delightful. What I love about teaching is when we are successful at interrupting the trauma, helping kids manage the anger, and giving kids the skills necessary to advance academically and socially. I love the possibility to change lives.

I attended a largely white, affluent high school in Texas. The academic education was excellent, however, there was no discussion of privilege, a need to give back, or an examination of the inequities in our community. The only teacher who pushed against the grain was Dr. Joanne Furtek Cox. She was a feisty ex-nun, liberal, history teacher. She made us read books like Upton Sinclair’s, The Jungle, and debate the causes of social ills. She forced us to examine uncomfortable things and challenged our thinking. She was also the first woman I knew with a doctorate. She inspired me and many other students to engage politically in our community.