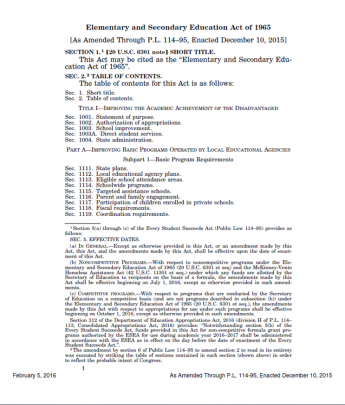 The Every Student Succeeds Act (ESSA), which the President signed into law on December 10, 2015, will build on the progress we have seen over the last seven years in critical ways by:

Requiring, for the first time in law, that all students be taught to high learning standards aligned with college coursework entrance requirements and state career and technical education standards.

Equity for Native Youth: Over the last seven years, Indian students and tribal communities have made progress in reinvigorating efforts to preserve and restore Native languages and culture; building tribal capacity to influence and control educational decisions for Native students; and raising awareness about school climate issues that are unique to Indian students and communities. The ESSA will support Native students and communities, Indian tribes, and states and districts in continuing that progress through an expanded focus on:

On December 22, 2015, the U.S. Department of Education (Department) published a Request For Information and notice of meetings (RFI) in the Federal Register (80 FR 79528), seeking advice and recommendations from interested parties involved with the implementation and operation of programs under Title I of the Elementary and Secondary Education Act (ESEA), as amended by the ESSA, concerning topics for which regulations or nonregulatory guidance may be necessary. Those meetings were held on January 11, 2016 in Washington, DC, and on January 19, 2016, in Los Angeles, California. Written comments were due on or before January 21, 2016.

In addition, pursuant to Executive Order 13175, Consultation and Coordination with Indian Tribal Governments, and the Department’s Tribal Consultation Policy, the Department has scheduled tribal consultations for April 24th, April 28th, May 12th, and June 26th. At these tribal consultation events, the Department welcomes comments generally on the ESSA, including on the ESEA, as amended by the ESSA, and is particularly interested in receiving comments on the following:
(1) the new grant program for Native language Immersion schools and projects,
(2) the report on Native American language medium education, and
(3) the report on responses to Indian student suicides.

The White House Initiative on American Indian Alaska Native Education has held tribal consultations on ESSA from April to June, 2016.

More information on Tribal Consultations can be found at the Department of Education’s dedicated website here.

Questions can be sent through e-mail to essa.questions@ed.gov
Sign up for e-mail updates about ESSA here
The Every Student Succeeds Act
Laws and Guidance | ESSA