WASHINGTON, DC – On Wednesday, December 5, President Obama will host the White House Tribal Nations Conference at the Department of the Interior. The conference will provide leaders from the 566 federally recognized tribes the opportunity to interact directly with the President and representatives from the highest levels of his Administration. Each federally recognized tribe will be invited to send one representative to the conference. This will be the fourth White House Tribal Nations Conference for the Obama Administration, and continues to build upon the President’s commitment to strengthen the government to government relationship with Indian Country. Additional details about the conference will be released at a later date.

The White House Initiative on American Indian and Alaska Native Education is excited to share with you the latest offerings from the Green Strides Webinar Series!

We want to continue our commitment to connecting tribal communities and federal agencies to one another. The Green Strides Webinar Series offers free education webinars from various federal agencies and may be of interest to educators, school administrators and facilities managers. The webinar series is designed to bring to you an array of resources that include, how to reduce a schools’ environmental impact and costs; improve health and wellness; and teach effective environmental literacy, including STEM, green careers, and civic engagement. These agencies are eager to provide you with increased opportunities to access their free resources and programs and your participation in these sessions can make a difference in helping to support the important work you are doing!

The Green Strides Webinar Series includes some of the best in federal school resources.

Click to find out more about the Green Strides Webinar Series  or paste http://www2.ed.gov/programs/green-ribbon-schools/webinar.html into your browser.

Shaun Martin, 31,  draws on his Native American heritage to inspire motivation and commitment from his students.  He has taught and coached for eight years at Chinle High 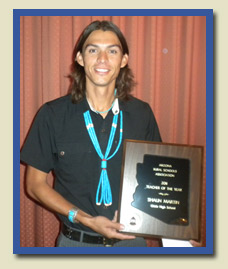 School in Chinle, Ariz., which enrolls about 925 students on a Navajo reservation. It was the first time rural Arizona education leaders had nominated a Native American teacher for competition.

Bill Blong, executive director of the Arizona Rural Schools Association, wrote in his nomination letter that the selection committee was impressed with the young teacher who works to be a good influence and dynamic mentor.

“Mr. Martin uses the ancient practice of distance running as a catalyst to teach self-discipline, commitment, and fortitude to impart the Navajo Way to his students,” he wrote. “He uses running as a positive activity and its discipline as a way to overcome the hardships of reservation life.”

Martin grew up running alongside his father, who was raised in a traditional Navajo family. They’d wake at 5 a.m. and run to the East to meet the sun. His father told him, “Running in the morning to meet the sun and holy people is how we celebrate life, it’s how we pray, and it’s a mentor to teach us about life.”

Martin knew he wanted to be a coach and teacher by middle school, and he never wavered from that goal. He was recruited to run at Northern Arizona University and accepted an academic scholarship from the Navajo Nation. He was among only a handful of Native American athletes in the NCAA Division 1 athletic program.

He graduated from college in 2004 and took the teaching position in Chinle on the reservation. He said in his competition application that he strives to teach students the most valuable lesson he’s learned: turning negative situations into positive ones.

He implemented a distance running program at Chinle High and at the district’s other six schools. For students in grades 2 through 12, Martin uses the club to link distance-running skills to success in the classroom and in life.

His cross-country and track teams have won 13 state titles, and 14 runners have been individual state champions. But he said his most significant accomplishment is that 44 of his students have gone to college on athletic or academic scholarships. Many students in his community don’t go to college.

Martin said in his application for the award that many of his school’s students face significant challenges, such as homes without running water or electricity, traveling as far as 45 miles one way to get to school, drug and alcohol abuse, and single-parent families. He said he tries to teach them to “only focus on the variables you can control, don’t stress the uncontrollable.”

The Rural Teacher of the Year award receives a $2,000 honorarium, and the school district receives $1,000 for instructional materials and school supplies. Martin presented at the National Rural Education Association convention and research symposium on Oct. 13 in Cincinnati, Ohio. 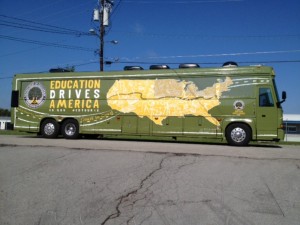 At the Great Basin Indian Education Roundtable on day two of ED’s cross-country bus tour, it was clear that education really does drive America. During Thursday’s first event at Great Basin College in Elko, Nev., we witnessed how communities can come together. 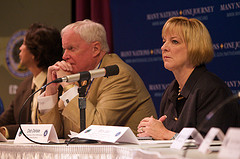 “It was refreshing to hear about best practices we can learn from and most especially share with other communities so they can best meet the needs of their children” -Asst Secretary Deb Delisle.

ED officials listened to panelists as they described the challenges they are facing, but also how school districts and communities are working together to improve education for Native American students.

“Native Americans are a significant portion of our enrollment and community.  It is important that we reach out to them as effectively as we can” – John Rice, Great Basin College’s Chief Development Officier 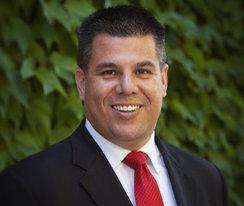 Trevor Greene, principal of Toppenish High School in Toppenish, WA, has been named the 2013 MetLife/NASSP (National Association of Secondary School Principals) National High School Principal of the Year. The award was announced at a surprise assembly attended by students, teachers, district staff members, State Superintendent Randy Dorn, and representatives from the state legislature and Sen. Patty Murray’s office. Greene was honored during a black-tie gala on September 21 in Washington, DC, to kick off National Principals Month.

In transforming Toppenish High School into a high-performing place of learning, Trevor Greene brought a renewed sense of hope to rural Washington. Nestled on the Yakama Indian Reservation, Toppenish serves a high-minority (95%), high-poverty (100%) student population. Because he grew up on the reservation, Greene saw the consequences of generational poverty, and he made it his personal mission to return to the area and bring the community together to support students’ education.

Greene made parental engagement a priority, reaching out to migrant families and families from the Yakama Nation. A migrant advocate on-staff ensures that the needs of students from that special population are being met. Greene also brought in a graduation specialist who keeps students on track to graduate, and with the help of his staff, he spent the last four years directing resources to the students who need them most.

“Trevor Greene played a central role in helping Toppenish achieve significant and sustained improvement among students who are affected by poverty and its associated issues,” said NASSP Executive Director JoAnn Bartoletti. “Trevor’s relentless effort to increase rigor and provide opportunities for all students, regardless of socio-economic status, ensures a personalized learning environment where every student feels valued.”

Knowing the importance of establishing a culture of high expectations, Greene expanded academic opportunities for his students, many of whom had never been expected to succeed, let alone graduate. He added rigorous courses, including 27 high-profile engineering and biomedical classes, a Microsoft IT Academy class, and a robotics class. To give students an opportunity to pursue postsecondary education, he made it possible for them to earn 30 college credits by the time they graduate from high school.

Thanks to Greene’s encouragement, participation in rigorous STEM courses skyrocketed, the school’s dropout rate decreased, and state science scores increased by 67% over a three-year period. In addition, special education students now have access to adaptive physical education and music courses, increasing engagement across the board.

“We applaud Trevor Greene for his leadership in engaging the teachers, parents, and all stakeholders in the transformation of Toppenish High School,” said Derrick Kelson, vice president, MetLife. “His efforts empower students to fulfill their potential and create a brighter future for the community.”

“It is important to recognize outstanding school leadership,” added Dennis White, vice president of Corporate Contributions for MetLife. “The MetLife/NASSP National Principal of the Year Program acknowledges the crucial role of principals as leaders and individuals who go above and beyond to make their schools the best they can be for students, teachers, and communities.”

Greene and Barron each received a grant of $5,000. Grants must be used in the school to improve learning (e.g. a special school project or professional development). NASSP and MetLife are strongly committed to supporting the visions of unsung school leaders. Each year the MetLife/NASSP National Principal of the Year program focuses attention on the outstanding work principals do in middle level and high schools across the country.

For more information about the program and winners, please visit www.nassp.org/poy.