Why did you decide to major in Computer Science? 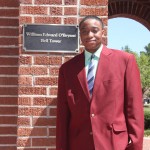 I will never forget registration day for college. I sat with my counselor and she asked what I would like to major in. I was unsure and told her “general studies.” She said that would be a bad idea and I should pick something. I came up with Information Technology (IT). She stated our school’s “IT” was for “INDUSTRIAL Technology,” and the only field of study pertaining to computers was Computer Science. I figured I would give it a try. My first semester I was enrolled in Computer Science I. The first time I coded, executed, and saw my work run perfectly was a spark that lit the fire. I am now one semester away from graduating with honors in Computer Science and Mathematics.

What do you plan to do with your computer science major in the future?

Oddly enough I am becoming very passionate about agriculture and growing my own food. On the surface it would seem having a background in CS is totally irrelevant. Luckily for me computers are used in every field in these technological times. I am in the process of interviewing with a prominent, world-wide technological company as a Software Engineer. This is one of the highest paid occupations to date. I have also become quite found of Data Analytics and Database Administration. These two practices will assist in the agriculture venture. I am also able to establish networks and design websites either professionally or as a lucrative side hustle.

Sidney Smith is a 2015 HBCU All-Star from the University of Arkansas at Pine Bluff.  He is a senior and computer science major.

The Initiative shall work closely with the Executive Office of the President on key Administration priorities related to advancing educational equity, excellence, and economic opportunity through HBCUs, in partnership with HBCU leaders, representatives, students, and alumni.