NOTE: May is Better Hearing and Speech Month 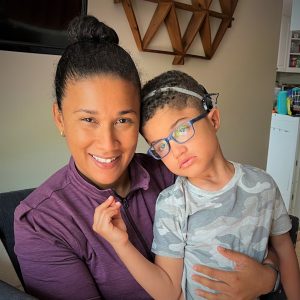 By Donia Shirley, Vice President of the National Family Association for Deaf-Blind and parent of Jaxson, a child who is deaf-blind.

When a baby is added to a family, invisible bonds often quickly form with others who have children the same age. For families who have children with complex support needs, that community can seem out of reach, especially when they have a child with a low incidence disability such as deaf-blindness.

A few days after our 6-week-old son Jaxson was transferred to our local children’s hospital, we started receiving diagnoses. We learned he was deaf-blind; he was profoundly Deaf and had colobomas (an eye condition that cannot be completely corrected). The medical team eventually informed us that Jaxson had CHARGE Syndrome.

We did not know anyone who had a child with a disability and felt lost. The community we had built when we had our older son, people we could call on about changing diapers and warming milk, didn’t understand our new situation. We now had a child with a tracheostomy and medical issues who was deaf-blind, and we didn’t have anyone to turn to.

We decided to look for information about CHARGE and immediately found the CHARGE Syndrome Foundation. Within a few hours of registering, I received an email from one of the staff members. This was an incredible moment and one of the first times I realized that having connections with other families would be vital for our family’s survival.

Jaxson spent his first six months in the hospital, and during that time, he received inpatient therapy services. Early on, there was a moment when I recognized that our role in his care was critical. We were working on having him hold his head up, and when he finally met this huge milestone, the occupational therapist acknowledged his hard work and what we were doing with him daily to help him develop.

The more I learned about how to support Jaxon’s growth and development, the more I realized that our family would be his biggest champions, working to advocate for his future. If we didn’t join him in his hard work and connect with other families and professionals who could help us, he wouldn’t be able to reach his full potential.

At 6 months old, Jaxson was released from the hospital, and we started working with the early intervention system. Unfortunately, none of the personnel we encountered had experience with a child who was deaf-blind. I set out to find resources, such as a teacher of the visually impaired, a teacher of the deaf/hard of hearing, and the state deaf-blind project—the Florida and Virgin Islands Deaf-Blind Collaborative. The project helped us find the resources and services Jaxson needed.

Without support, it’s hard to find your footing. Making connections with families is like a snowball effect: You start to feel more connected the more you build relationships. Suddenly, you have a community, and those supports and relationships are vital to helping the whole family thrive.

I learned the most about deaf-blindness once I found and began networking with the National Family Association for Deaf-Blind (NFADB). NFADB educated us about the services that Jaxson would need and provided access to professionals who helped us learn about effective strategies for children who are deaf-blind and showed us ways we could replicate them in our work with Jaxson.

Over the years, we have encountered a lack of qualified professionals and, as a result, decided to withdraw Jaxson from the public school system and create a learning environment for him at home. Thanks to support from the Family Empowerment Scholarship, we put together a terrific educational team of therapists, teachers, and individuals who work with Jaxson. They see him as an individual and not a specific diagnosis. Since starting his homeschooling two years ago, Jaxson has made tremendous progress. He can now write, identify, and spell about 80 words, communicate using sign language, and recently taught himself Braille (without explicit instruction). He has an amazing speech-language pathologist. She’s taught herself braille and sign language to support Jaxson more effectively. He is thriving, our family is thriving, and we have found our footing.

We wouldn’t have been able to come this far without the support, knowledge, and connections we found through family organizations, our state of Florida’s deaf-blind project, the Texas School for the Blind and Visually Impaired’s online resources, and the National Center on Deaf-Blindness. No one prepares you to have a child who is deaf-blind or who has CHARGE. We knew nothing before we connected and engaged with other families and the people at these organizations. Thanks to those connections, we are now confident in our ability to be strong advocates for Jaxson. It truly is all about the connections—for us and for Jaxson.