NOTE: 2020 is the 100th anniversary of the Vocational Rehabilitation Program. 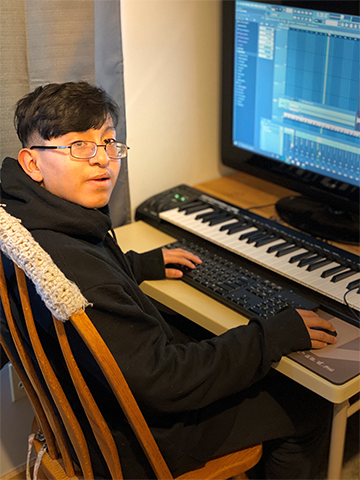 By: Minnesota State Services for the Blind (SSB)

“It isn’t too scary,” Levi Welsch said, when asked how he felt about the possibility of his vision loss deteriorating in the future. “I am learning skills,” he said, “and I know that Minnesota State Services for the Blind (SSB) has my back.”

Levi, who was diagnosed with vision loss in 2017, got to witness the services offered at SSB by working at the front desk as our student intern over the summer of 2019.

“I learned a lot about all the resources, through all the people that came in who needed something. I didn’t know about all the things that SSB does before I had that job,” said Levi, who was 14-years-old during his internship.

Like many teenagers, Levi wanted to find a job so that he could earn some money and buy the things he wanted. Levi’s passion is music, and his summer job helped him to pay for some of the equipment he had been wanting on his own. In addition to the cash, the prospect of getting a job and working was exciting to Levi.

“I interviewed for the job, and then, because I went away to camp for a week, I didn’t know if I had gotten it,” said Levi. “When I found out that I got the job, I celebrated!”

Levi learned about the internship opportunity through his SSB counselor, Shane DeSantis. This early start to pre-employment transition services helps promote possibilities versus limitations and can completely change a student’s trajectory.

“Shane calls me just to check in and see how I’m doing,” said Levi, “and he lets me know about things I could try.”

Levi has been learning new skills and facing new challenges since being diagnosed with a form of retina pigmentosa in 2017.

“It’s been hard at times,” said Delise Welsch, Levi’s mom. “Levi was pretty angry, and we spent a lot of time going to specialists.”

Looking back at the past couple of years, and remembering his own frustration, Levi offered some advice to students going through similar struggles.

“Don’t be stubborn like I was,” he said. “You’ve got to just decide to learn things.”

One of the things that was hard at first for Levi was learning to use a white cane. He said that the cane is helpful to him, especially at night, or in low light, but using a cane felt embarrassing to him at first. It was the kids at church who helped him get past that embarrassment.

“They were accepting and didn’t single me out,” said Levi. “That made a big difference.”

From his summer job, Levi gained a lot of customer service skills.

“You had to always be polite, and you had to know how to transfer calls to the right person,” said Levi.

In addition to those on-the-job skills, Levi took on other responsibilities that come with holding down a job.

“I had to get up really early, so I had to learn how to adjust my sleep schedule,” said Levi. “Then, in the morning, my parents would drop me off at their work, and I had to take the bus from there to SSB. That was good for me too.”

In the fall of 2018, Levi started attending the Minnesota State Academy for the Blind (MSAB) in Faribault, Minnesota.

Levi’s mom, Delise, agrees that MSAB has been a good fit for Levi.

“You don’t have to fight for accommodations, and they have sports, like Goalball, wrestling and beep baseball, which are great for Levi,” she said.