Christopher graduated with a degree in computer science from California Polytechnic State University and set his sights on becoming a Software Engineer. Over the course of two years, Christopher applied for nearly 600 positions without much success.

As a result of his disability, and like other individuals who have autism spectrum disorders, Christopher had some limitations with social and communication skills that made interviewing for jobs a challenge. His strengths, however, included an acute attention to detail and a strong ability to recognize patterns. He was also a video game guru. 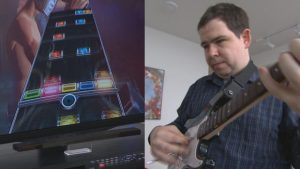 In 2015, Christopher began to receive vocational rehabilitation (VR) services from the California Department of Rehabilitation. His VR Counselor provided counseling and guidance and helped Christopher learn more about his career skills through a vocational assessment. A Business Specialist worked with Christopher to build his resume and hone his interviewing skills.

In August 2016, Microsoft accepted Christopher into its Autism Hiring Program. According to the company’s website, “the academy provides applicants with disabilities an opportunity to showcase their unique talents and meet hiring managers and teams while learning about the company.”

Christopher completed Microsoft’s multiple-day hiring process—a hands-on academy that focuses on workability, team projects, and skills assessment; and one month later, Microsoft hired Christopher as a Software Engineer! He completed the company’s onboarding process and developed a relationship with his mentor, a Microsoft colleague.

During his first few months of work, Christopher received supports from PROVAIL, a non-profit multi-service agency based in Seattle as he settled into his new position. 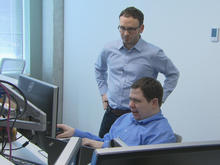 Christopher Pauley working at a computer at Microsoft / CBS

Today, Christopher lives independently in his own apartment and drives himself to work each day. His advice to other individuals with disabilities as they pursue their career goals: “Don’t give up and make sure to always aim high. Don’t aim in the middle, you know, shoot for the stars every time cause you never know what might happen.”

In February 2018, Christopher appeared on Sunday Morning, a CBS television news program. The program featured his story and that of a young woman who also has autism and her career with a multinational enterprise software firm.

To read the story or watch the clip, visit Sunday Morning.

For more information about the VR program in California, visit our partners at the California Department of Rehabilitation.

OSERS shares Christopher’s success story in recognition of NDEAM and in partnership with the Council of State Administrators of Vocational Rehabilitation. 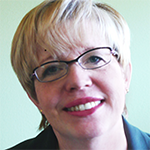