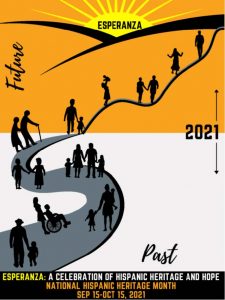 Since then, the month has been celebrated nationwide through festivals, art shows, conferences, community gatherings, and much more. The month also celebrates the independence days of several Latin American countries, including: Costa Rica, El Salvador, Guatemala, Honduras, and Nicaragua on September 15th, Mexico on September 16th, and Chile on September 18th. They also include holidays that recognize Hispanic contributions such as Virgin Islands-Puerto Rico Friendship Day that is celebrated in the U.S. Virgin Islands.

“During National Hispanic Heritage Month, we recognize that Hispanic heritage is American heritage. We see it in every aspect of our national life: on our television and movie screens, in the music that moves our feet, and in the foods we enjoy. We benefit from the many contributions of Hispanic scientists working in labs across the country to help us fight COVID-19 and the doctors and the nurses on the front lines caring for people’s health. Our Nation is represented by Hispanic diplomats who share our values in countries all over the world and strengthened by military members and their families who serve and sacrifice for the United States. Our communities are represented by Hispanic elected officials, and our children are taught by Hispanic teachers. Our future will be shaped by Hispanic engineers who are working to develop new technology that will help us grasp our clean energy future and by the skilled union workers who are going to build it.”

The U.S. Department of Education’s Office of Postsecondary Education conducted interviews with two Hispanic education leaders to share their experiences and insights in education:

In this interview, Dr. César Rey Hernández, former Secretary of Education for Puerto Rico, discusses with the U.S. Department of Education his experiences and insights in the fields of education and human rights advocacy, as well as how his Hispanic/Puerto Rican heritage has influenced his worldview and his approach to his work.

In this interview, Ms. Vicky Castro, community leader and member of the Prince William County (VA) Racial and Social Justice Commission, discusses with the U.S. Department of Education her experiences and insights in the fields of social work and education, as well as how her Hispanic/Costa Rican heritage has influenced her worldview and her approach to her work.