In celebrating Hispanic Heritage Month, it’s important to recognize the contributions of Hispanic-Serving Institutions (HSIs) and the remarkable impact they have had on communities across the country. The Hispanic-Serving Institutions designation was first created in the Higher Education Amendments of 1992. The statutory requirement for an institution to qualify as an HSI is that it must be an eligible public or private non-profit institution of higher education and have the enrollment of undergraduate full-time equivalent students that is at least 25 percent Hispanic students. This requirement ensures that HSIs are supporting first-generation and/or low-income Hispanic students.

With over 60 million Hispanics  in the United States, and 3.6 million of them postsecondary students, here are some fast facts about HSIs.

HSIs have been critical to making the promise of a postsecondary education a reality for many Hispanic students and to increasing the number of certificates and degrees attained by Hispanic students across the country. They have helped provide important pathways for in-demand jobs, apprenticeships, internships, fellowships, mentorships, and work-based learning initiatives through public-private partnerships and have partnered with their local school districts to offer dual enrollment programs. These and many more innovative contributions of HSIs are worth celebrating not just during Hispanic Heritage Month, but all year long.

This was crossposted from the National Center on Education Statistics blog.

Breaking down data by racial and ethnic groups, such as White, Black, Hispanic, and Asian, can provide a better understanding of education performance and outcomes than just looking at overall outcomes. But these broad racial/ethnic groupings can still be large enough to hide important information and nuances about student performance and outcomes.

A recent NCES report, Status and Trends in the Education of Racial and Ethnic Groups 2018, examines current conditions and changes over time in education activities and outcomes for members of racial and ethnic groups in the United States. The report also uses data from the U.S. Census Bureau’s American Community Survey[1] to examine outcomes for U.S. and foreign-born individuals who identify with specific Hispanic and Asian ancestry subgroups (e.g., Mexican, Puerto Rican, Chinese, Asian Indian).[2] For example, although 11 percent of Asian children under age 18 were living in poverty in 2016, the child poverty rate differed by more than 30 percentage points across the selected Asian subgroups—ranging from 6 percent each for Asian Indian, Filipino, and Japanese children to 37 percent for Bangladeshi children.

These differences among subgroups were seen in other measures as well, including college participation and attainment.

The College Participation Rates indicator shows the total college enrollment rate, meaning the percentage of 18- to 24-year-olds enrolled in 2- or 4-year colleges and universities. 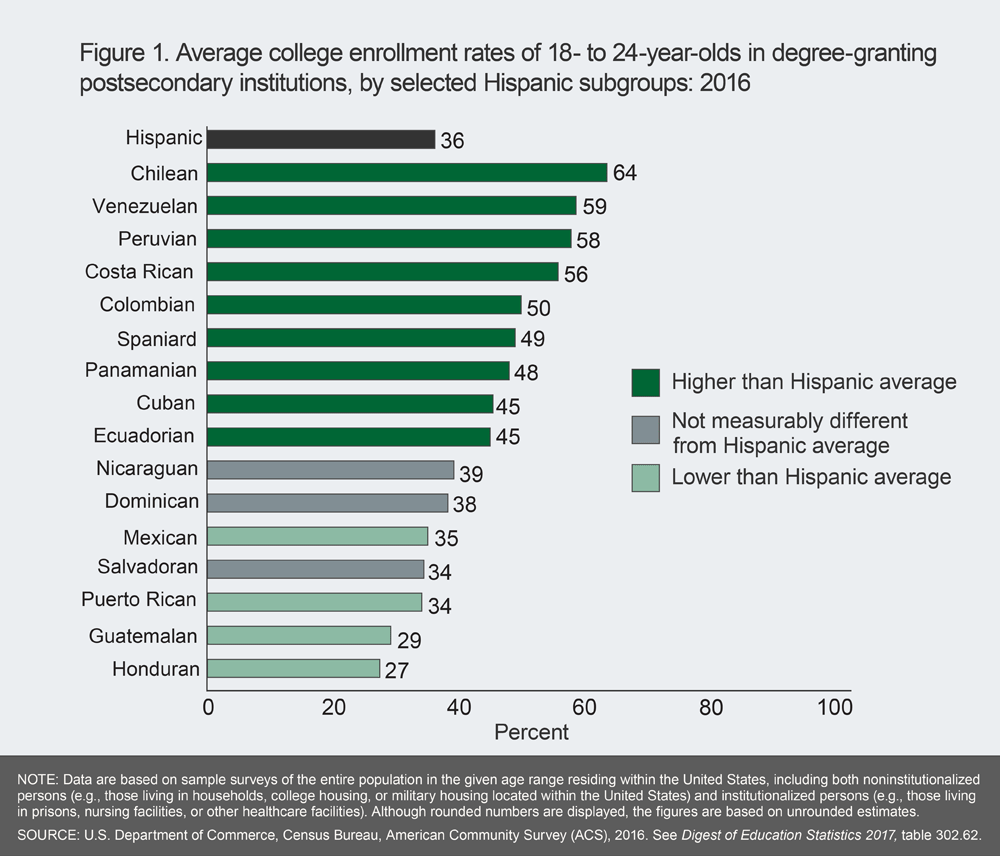 ATTAINMENT OF A BACHELOR’S OR HIGHER DEGREE

The Attainment of a Bachelor’s or Higher Degree indicator shows the percentage of adults (25 or older) who earned at least a bachelor’s degree. 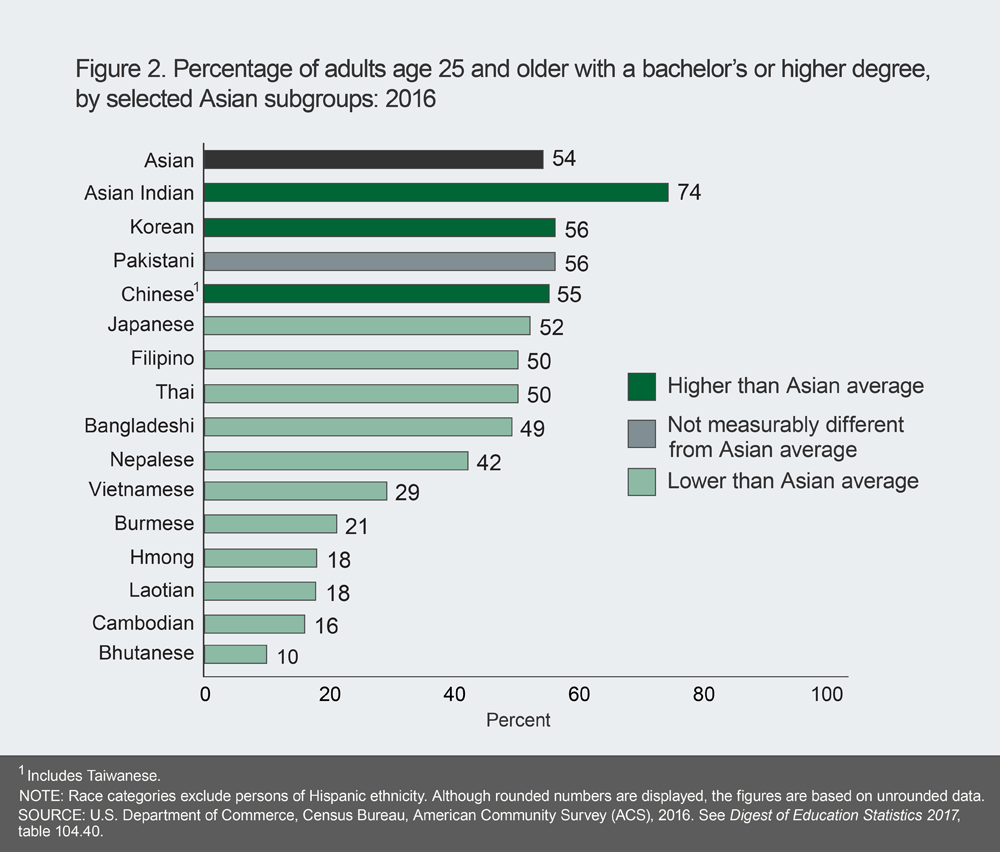 Looking for more information about different racial/ethnic populations on topics spanning from early childcare and education arrangements to earnings and employment as an adult? Check out the full Status and Trends in the Education of Racial and Ethnic Groups 2018 report!

[1] Learn more about the Public Use Microdata Sample of the American Community Survey.

[2] If the number of individuals in a subgroup is too small, the data may not be presented for privacy reasons. Additionally, a small sample size can mean that an apparent difference between two groups is not statistically significant.

On January 20, 2016, the White House Initiative on Educational Excellence for Hispanics hosted a Bright Spots in Hispanic Education Google+ Hangout session highlighting efforts focused on the postsecondary education completion of all students, including Latino and undocumented students, around the country. Beatriz Ceja, Hispanic-Serving Institutions Division Director at the U.S. Department of Education, and I were joined by representatives from Bright Spots in Illinois, Ohio, New York, California, New Jersey, North Carolina, and Texas.

The Google+ Hangout was a lively and informative discussion on promising practices and strategies supporting and investing in postsecondary education in order to close the completion gap for Hispanic students. Hispanic students comprise the largest minority group on college campuses, however, as of 2012, only 22% of young Hispanics attained an associate’s degree or higher (National Center for Education Statistics, 2013). In addition, according to a 2012 white paper for the Hispanic Association of Colleges and Universities, nearly one in two Latino college students are the first in their family to attend a higher education institution. Their navigation of higher education is often a challenge and concern for them and their families. Helping ensure they persist and complete their postsecondary education by providing them the tools and resources needed to do so is crucial to both their success and the success of the nation. Bright Spots that were featured are helping to combat disparities and increase the number of Latino college graduates through their efforts.

White House Initiative on Educational Excellence for Hispanics staff at the Google + Hangout on Postsecondary Education Completion on January 20, 2016.

“…The demographics in North Carolina have quickly been transforming over the last two decades and we’re really seeing that first hand in our educational system. And so, simply puts SLI in business of creating social and cultural capital and I think that’s really key to get our students through high school into college and to succeed in college…” Ricky Hurtado, UNC-Chapel Hill, Scholars’ Latino Initiative

The work of these Bright Spots is crucial for our future generation. In order to achieve success, Latino students need guidance prior to college enrollment and throughout their undergraduate career. From career development to closing the graduation gap between Latinos and their white counterparts, these Bright Spots continue to raise the bar for our Latino students. All of these organizations understand the importance of a post-secondary education and they have made a commitment to help students maximize their potential.

The next Google+ Hangout will take place on Wednesday, February 17, 2016 in Spanish and will focus on Family Engagement. We hope you will join us as we continue to work together to build on the progress made for Hispanic students throughout the nation.