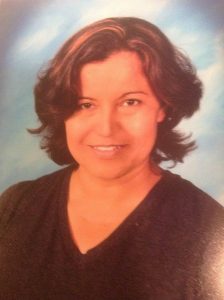 Ms. Gonzalez grew up in an at-risk area, a small part of Oxnard, California called Colonia. She first became interested in teaching when I was enrolled in Ms. Lisa Villanueva’s world history class. Many from the neighborhood were enrolled in her class, a bunch of young people, like herself, who had been written off by others due to the location of our addresses; but Ms. Villanueva exerted herself, set high expectations for them, believed in them and helped them along the way. She would go out of her way, to talk to them about the situations beyond the classroom that were affecting them in the neighborhood and how they could escape them. Ms. Gonzalez saw the impact Ms. Villanueva made on her peers and herself and she wanted to be just like her, she wanted to make a difference.

While at Cal State University of Northridge (CSUN), Ms. Gonzalez got involved in political and human rights organizations, while she worked as a teacher’s assistant (TA). While she was in the classroom, as a TA, she saw many educational injustices towards at-risk students, who were just like her. This motivated her all the more to follow in Ms. Villanueva’s steps, and become an inspiration that she was to her and so many others.

Ms. Gonzalez has now worked as a teacher for LAUSD for eleven years, and they have zoomed by. Many warned her that after five years she would get burned out, she’s still waiting and expecting that it will never come. She loves what she does, young people are the future of this country and we need to build them up. In her teaching career she has experienced the stress of No Child Left Behind and high stakes testing that are linked to teacher efficiency, but there is more to a student than that.  She ask many former students who are at the university level now, who stay in touch with her, what teachers made the most impact on them and why?  Many of them named teachers who not only looked at their test scores, but also inspired them to do more than they themselves expected to reach. When they speak, she sees herself in them and they inspire her to continue to touch not only the minds but also the hearts of all students.

I teach because I want to make a difference in students’ lives, and what better way to do this than to become a part of the life long positive impact.

I love providing learning experiences to students that go beyond the class room.

I had a teacher in High School, Ms. Lisa Villanueva who inspired me to follow in her foot steps and I attempt to emulate what she did in her class room with my students, to not only cover the curriculum but to create unforgettable learning experiences.