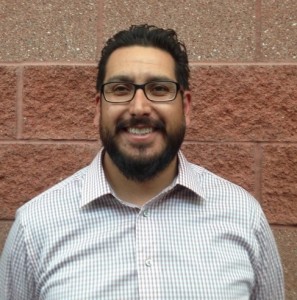 In 2004, Rick Archuletta started his career as a secondary educator at Fountain-Ft. Carson High School in Fountain, Colorado, teaching Special Education and after four years he moved to the Social Studies department where he teaches advanced United States History, American Government, and Psychology.  Mr. Archuletta has also worked as an adjunct professor of Chicano Studies at Colorado State University-Pueblo, specifically teaching the Voices of Protest course, in which the history of people of color in the United States and the state of Colorado are highlighted along with social movements that stem from differences in race, class, and gender.  Prior to working as an educator, Mr. Archuletta graduated from Dakota Wesleyan University in Mitchell, South Dakota with degrees in both Special Education and History.  He continued his education and earned a Master of Arts degree from Colorado State University-Pueblo in United States History following the successful defense of his thesis, “Reclaiming Aztlan:  Southern Colorado and Chicano Activism of the 1970s”.  Mr. Archuletta has presented original research on both labor and community activism in Colorado during the Chicano movement at the Annual Conference of the Western History Association and at the Society for the Interdisciplinary Study of Social Imagery Conference.

To me, teaching is a way to make an impact and give back to our community.  Because I teach in a school district with a diverse student population, I believe it is important that students have diverse role models and if I can serve as an example for at least one student, then I have made a positive contribution.

I love the everyday interaction with students.  I love the challenge and excitement that comes with building an atmosphere in which students feel like they are an integral part of a team and that their ideas matter.  It is exciting to see students engaging with the content and each other in such a way that allows them to connect with their learning.

I had many wonderful teachers while attending school. However, I was inspired to teach after taking a mentoring class during my junior year of high school.  For this particular class, I was paired alongside a student with disabilities and I worked with them in a general education course.  I enjoyed the work so much that I signed up for the class again as a senior and afterwards, decided that I wanted to become a teacher.  While attending college at Dakota Wesleyan University, Dr. Sylvia Street and Prof. Kevin Lein had a great impact in shaping me as an educator and providing me the tools to be successful in the classroom.