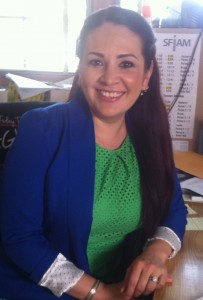 Pearl Arredondo is a National Board Certified Teacher of sixth-grade English and History. She holds a Bachelor of Arts in Liberal Studies and Psychology as well as a Master of Arts in Education and Instructional Leadership from Pepperdine University. In 2010, she was part of a teacher-led team that founded San Fernando Institute for Applied Media (SFiAM), the first pilot middle school established in the Los Angeles Unified School District. She taught for 10 years before becoming the instructional specialist and now principal of SFiAM. Pearl is passionate about increasing student access to technology and closing the digital divide. She is featured in People Magazine’s My American Dream: Great Success Against All Odds campaign sponsored by Milk Life. She was also featured on TED Talks Education and is a frequent speaker and panelist related to those key issues. As a Teach Plus Policy Fellow, she met with President Obama’s senior advisors to discuss teacher tenure and elevating the teaching profession. As part of Educators for Excellence, she helped write a series of recommendations entitled Reimagining Tenure: Protecting Our Students and Our Profession. In 2014, she received the “Inspirational Teacher Award” from United Way of Greater Los Angeles, was named California Woman of the Year from California Assembly District 39, and was honored at the Ford Theatre’s Annual Gala for being an inspirational teacher. Pearl is a tireless advocate for public education and technology-based curriculum. She is also a role model for young Latinas seeking to make a difference in their communities. Her goal is to make SFiAM a model of educational reform by preparing all students to be effective communicators in the 21st century.

Why do you teach?  I teach because my life trajectory was changed by teachers at a very young age. It took one teacher to say I would never make it and another to say I would. Since then, I realized that everyone could use support and I wanted to be that person. I knew that I wanted to help others achieve greatness, especially when all the odds were against them.

What do you love about teaching? What I love about teaching is that every day is a new opportunity to start fresh. It provides a backdrop for continuous progress, no matter how slow. On the days that students look frustrated or ready to give up, I switch gears and remind them that nothing worth doing will ever be easy. I love it the most when they believe me and continue to push through.

When you were a student, was there a great teacher who inspired you? As a fifth grade student in Ms. Hirschkoff’s class, I learned that I could be unstoppable. She challenged me to look beyond my circumstances and pursue education as means of upward mobility. She believed that I could compete with the best students. She caused me to believe in myself. As I decided upon a career, I thought about how she impacted my life and knew that I wanted to do the same for others.